"I can't boat everyday, but I can always Dream"

You may arrive at a River Permit page from Dreamflows in a number of ways:

The rest of this help page describes the layout and contents of a Dreamflows River Permit page.  The following sample permit page is used for illustration: 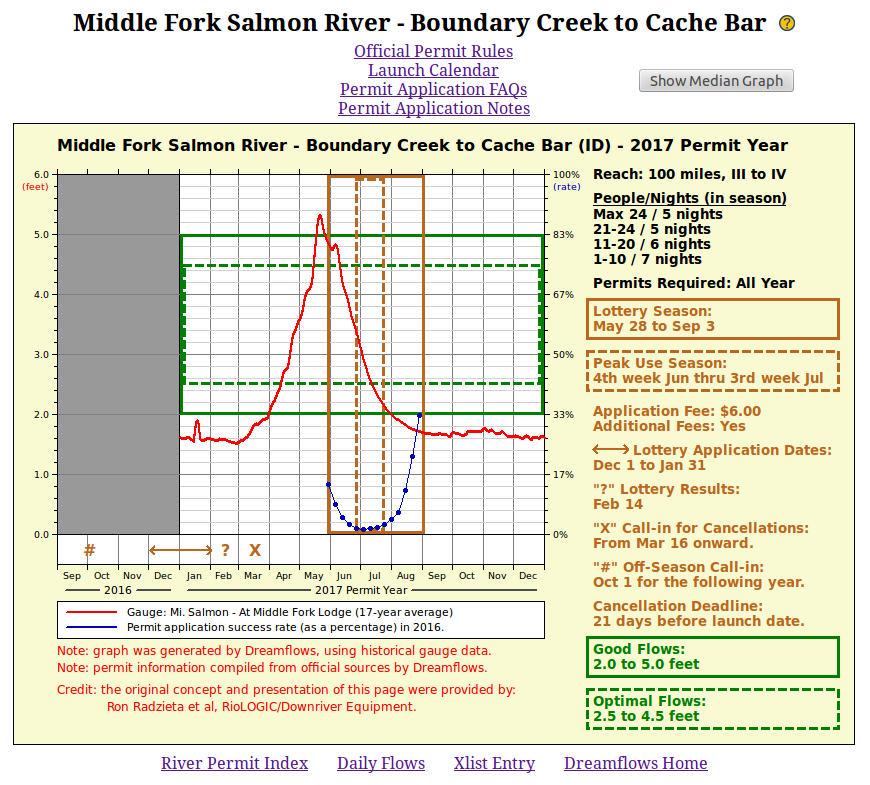 However, in what follows, parts of the sample page may be blanked out or omitted to make it clearer which area of the image is being discussed. 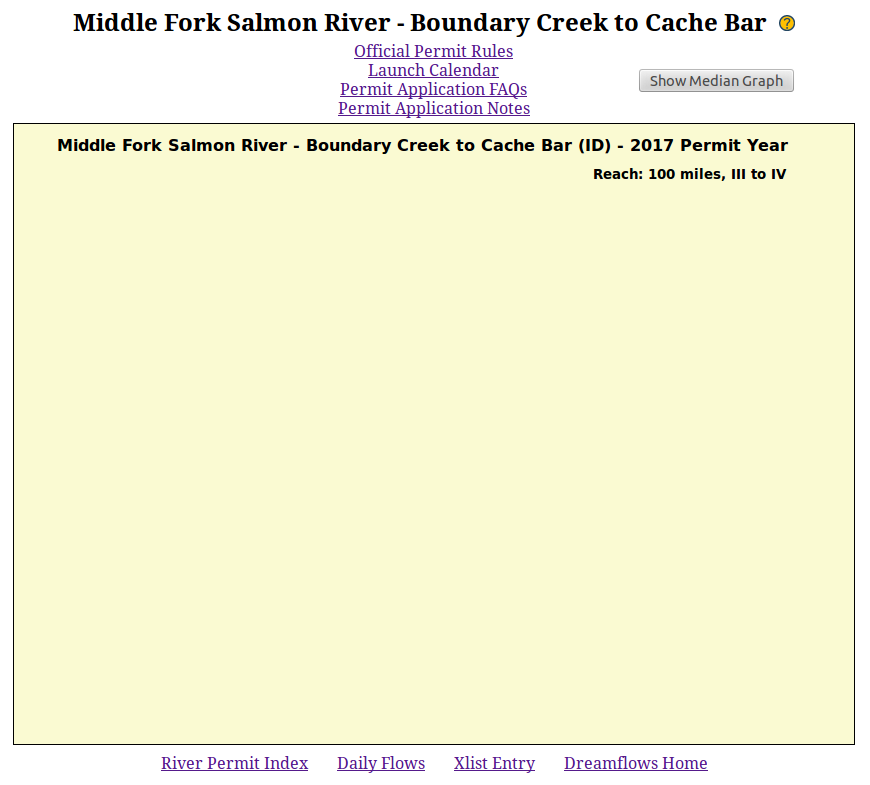 The first line gives the river and reach, which are repeated further down the page and discussed below.  Clicking the

icon just to the right of river and reach brings you to this help page.

Official Permit Rules links to a page giving official permit application rules and other pertinent information.  Sometimes only a single official web page is available (or needed) to discuss everything of interest, but other times the information is spread over several web pages.  In that case there will be links from the first official page to other pages of interest.  It's in your interest to read and fully understand every rule and instruction given on each page.  Sometimes the information given is vague, and / or contradictory.  Contact the permitting agency to resolve issues - getting some seemingly insignificant detail about your trip wrong could result is delays or even cancellation of your trip.

Permit Application FAQs, or More Permit Info, or similar (if present) links to an auxilliary (but still official) page that Dreamflows thinks may be particularly relevant.

Permit Application Notes (if present) links to the relevant entry in a PDF hosted by Down River Equipment (and sponsored by them).  This page summarizes the application process for that permit, however be aware that as of writing, it is incomplete in places.  It was also written for 2016, so some of the information is out-of-date.  Nevertheless, for the most part it can provide a useful quick-lookup reference after you've read the official pages.

The top of the yellow box gives the title and reach beta.  In this example, they together say that this permit is for the Boundary Creek to Cache Bar reach/run on the Middle Fork of the Salmon River in Idaho, the information supplied here is for the 2017 permit year, the reach is 100 miles long, and the difficulty is generally considered class III to IV.

Note that the "beta" is approximate - the length of the run depends on where you put in and take out, and the difficulty depends on flow, craft type, and other factors.  Always consult a guidebook to get the full scoop on length and difficulty.

Note that the permitting year won't necessarily be the current one - for instance for Grand Canyon, applications accepted in 2017 are for the 2018 permit year.

At the bottom of the page, there are four links: 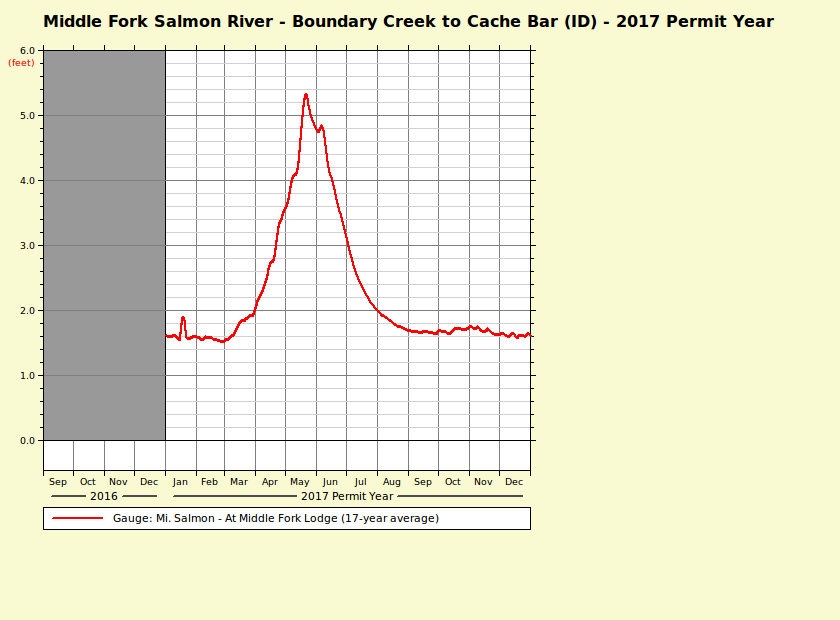 The graph (red) is a weighted average, which in this context means that for each day of the year being calculated, the displayed value is the average for that day, mixed in with average values from adjacent days to smooth the results somewhat.  The legend below the graph indicates that this plot is for the Mi. Salmon - At Middle Fork Lodge flow site, and that it's a weighted average of 17 years of data.

Note that the displayed hydrograph is a weighted average of the available data.  Values could be quite different this year.

The Y-axis in this example is gauge height in feet, as indicated by the red (feet) legend.  Other graphs may display river flow in cubic feet per second, and that will be indicated by a red (cfs) legend instead. 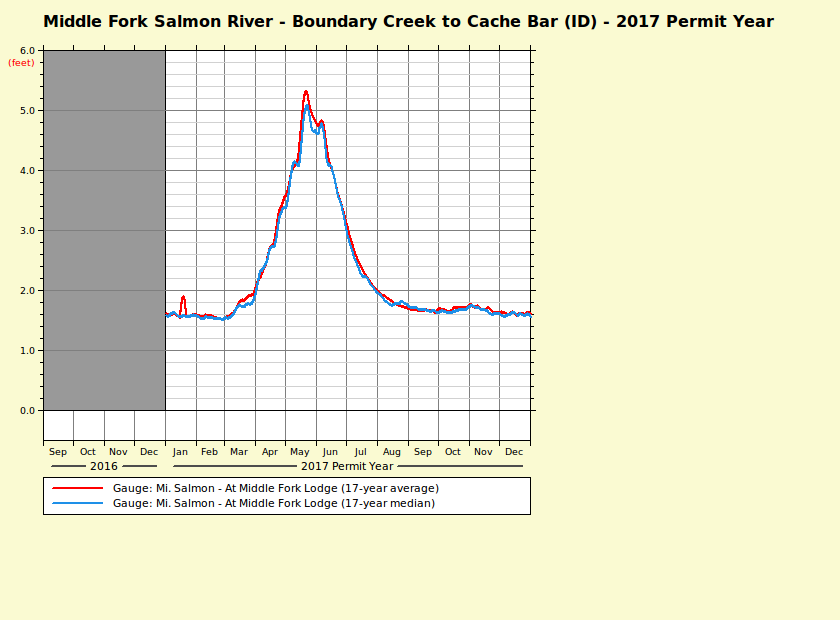 This graph is displayed when the Show Median Graph button is pressed.  The red graph (partly hidden) is the weighted average, see the previous section.  The light blue graph is the weighted median, which in this context means that for each day of the year being calculated, the displayed value is the median for that day, mixed in with median values from adjacent days to smooth the results somewhat.

The main advantages of the traditional average (or mean) are that all the available data contributes to the result, and the concept is familiar to most everyone.  A downside is that even a single very large (or very small) outlying value can skew the results significantly (as shown below).

On the other hand, the median ignores all the outlying values, and uses only the central value (or in some cases central two values).  If most years have the same general flow pattern, then this is a useful way to represent the data (since unusual "crazy" data is ignored).  However, if flows are all over the place, then the resulting median graph can be misleading.

In the case of the Mi. Salmon - At Middle Fork Lodge gauge above, the average and median graphs are very similar.  The implication is that the Middle Fork Salmon probably has a consistent / predictable flow pattern.  Of course low water years will have low flows, and high water years high flows, but it seems likely that most years will follow the general pattern shown above.

On the other hand, consider: 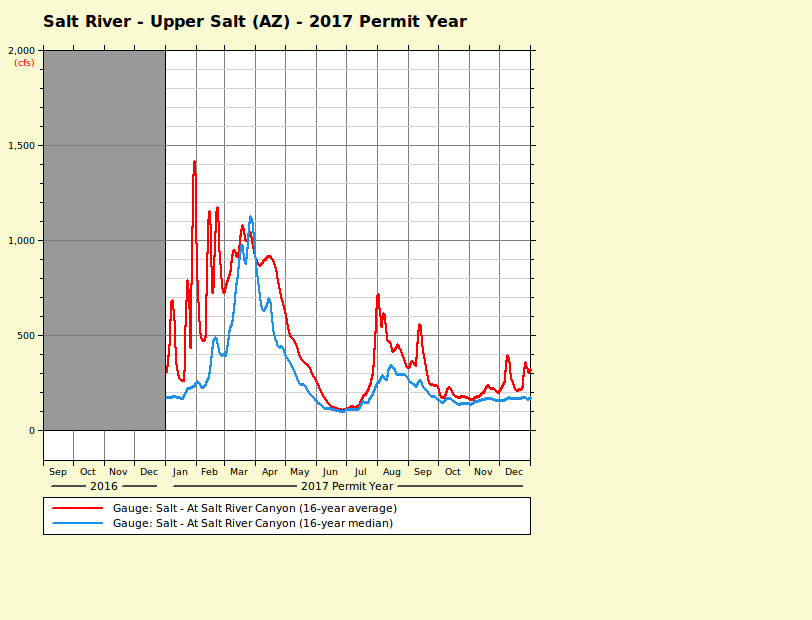 In this case, the two graphs don't correspond at all well.  The median graph is reasonably smooth, yet the average graph is all over the place in January, February, August, September, and to some extent December.  When one sees a mismatch like that, it's worth finding out why.  [In this case it's because during those months flash floods (with flows all the way up to 50,000 cfs) occur from time to time.  The high spikes affect the average graph directly, but not the median graph.] 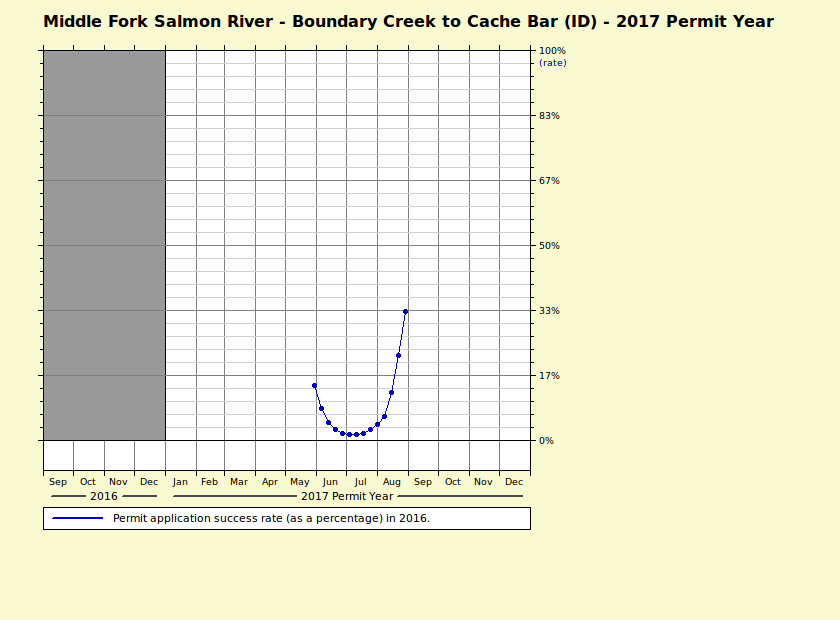 Please note that the percentages are for the given year (2016 in this case), and the percentages for later years are sure to be different.  However, the general trend is likely to be similar. 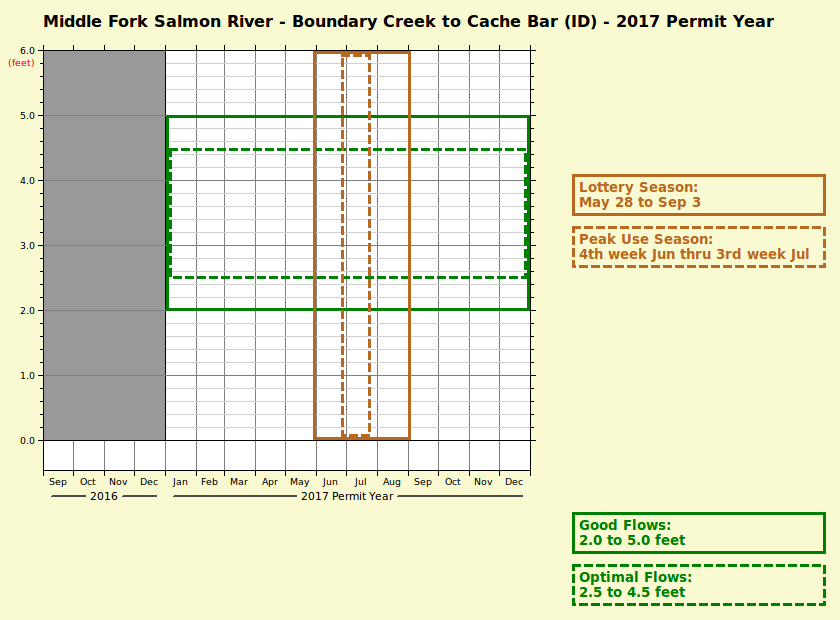 The dotted orange box (if present) shows the peak use part of the "season".  In effect, it means the time of year that it's hardest to get a permit.  In this example, the peak use season extends from the 4th week of June through the 3rd week of July.

The solid green box in the graph area gives the range of generally-accepted "good flows".  Note that's a hugely subjective term, depending on craft type and much else besides.  It's also a vague term: to some paddlers it means the range of "fun flows", to others the range at which they found it physically possible (though not necessarily safe or even fun) to run the river.  Dreamflows displays "fun flows" where known, otherwise whatever values are available.

The dotted green box (if present) gives the range of "optimal flows".  That's subjective too, though at minimum it should indicate flows that most paddlers consider both safe and fun. 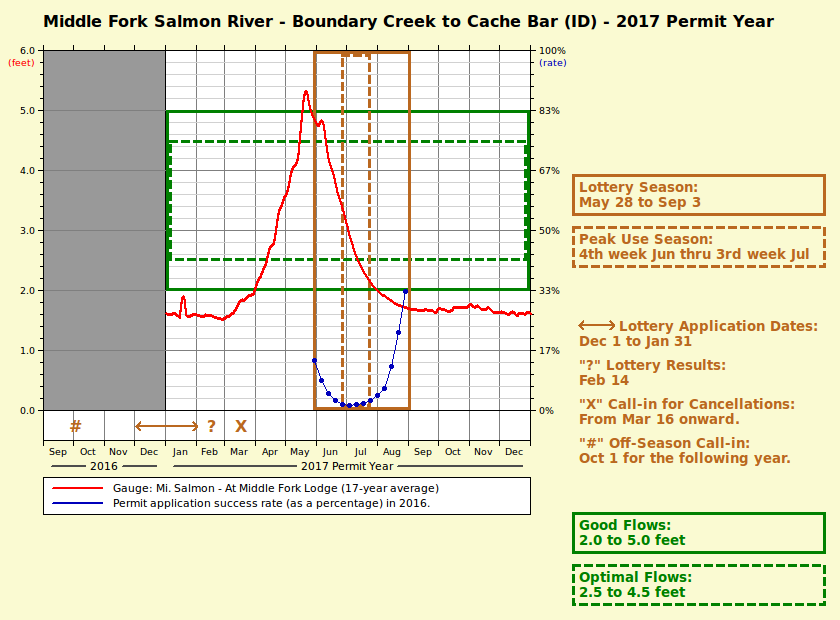 This is really the heart of the page.  It graphically displays when the lottery season is, what the "good" flow range is, and when flows can be expected to be at the intersection of the two.  See the previous sections on how to interpret individual components of the graph.

Personally, I'd interpret the above graph as follows.  Early season flows are high, then drop quite quickly.  Flow tends to drop below the "good flow" range early August.  But, as you'd therefore expect, it becomes progressively easier to get a permit from early August onward.  It's also relatively easy to get a permit early in the season.  Reasons might include higher and/or unpredictable flows, colder weather, and that access to the normal put-in may be hard or impossible (due to snow).  Statistically, the best time to run the river is in late June / July, but lotsa luck getting a permit then.

So - back to your world - which launch date to ask for in your permit application?  Decisions, decisions, but the graph should at least give you an informed starting point.

The area just below the graph graphically displays certain dates or date ranges given on the right side.  Should be self-explanatory (except perhaps for what the terms actually mean - and they're explained in the next section). 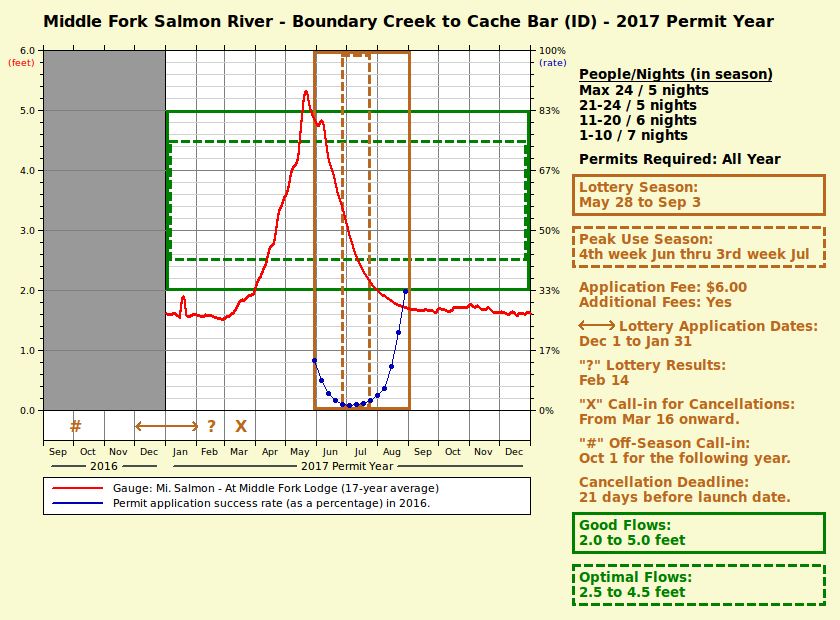 Turns out pretty much every permitted river uses a different permit/lottery system than most any other.  So, the right side (which lists relevant permit application dates and other details) can vary widely between different permits.  The following may appear:

Nothing to add at this point, except to thank Richard Ferguson and Ron Radzietta et al for their contributions to this project.